That Guy In Blue

The first time she saw him, it was that blue and those slender eyes, that caught her glimpse and she could just wave a 'hi'. There was some vigor in that distance that kept them apart and some ardour holding that distance.
How can one person hold something so intense, she'd thought.
Lost in her own experiences, this is it, she thought again, smiling; he will become a treasured memory, treasured like those constellations in the sky, which continuously reminds the sky about their presence. A treasure that only a heart can hold. He was someone, she'd not want to lose. 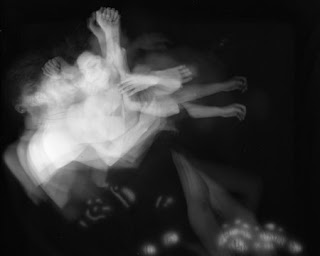 "I am glad that you exist." She murmured. Never had she known how much relief it can be for someone to just exist. Relief of having known someone like him.

Wrapped around each other, smiling in the dim light coming through the window, piercing the curtain that is how his eyes had pierced hers, with shine in them. He was all the particles that the light contains, illuminating her, adorning her darkness with smiles, giggles and light.

But that was not the end, that was just a beginning. People leave, leaving you in the purgatory - flooded the realization. Still, the frame enraged her demons while also soothed her soul.
Even if he leaves the memory would stay, the relief will linger, relief of knowing that guy in blue would not haunt her, but make her beam. The fierce vibration, that strong heat will always calm her down. The beating heart and the sound of it, would resonate in her veins.
Because all she had seen for the first time was that blue and those slender eyes.
Posted by Unknown at 08:00